The big day has finally arrived! We woke up early, checked out of the fairly nasty place where we spent our last night in town and headed to Mr Mechanic to pick up the motorcycle that Tanya would dub “the menace”.

No major problems picking up the bike. The motorbike was there, ready and waiting. Our rented jackets were conveniently waiting at a different Mr Mechanic store. It was only a few blocks away so we fired up the menace and headed over there. Initially being back on a bike bigger than 125cc which was also carrying Tanya and all our stuff was a little frightening but it all came back to me. Once we'd picked up the jackets we fueled up and headed out of town.

If the fancy map and picture viewer above doesn't load, click here to view our Mae Hong Son loop pictures.

The traffic of Chiang Mai was quickly left behind. We hadn't got away as early as we should have. It was really starting to heat up so there were frequent short breaks to drink water or fresh fruit juice from one of the many road side stands.

Cruising down highway 108 we reached our turn off at highway 1009 and headed for Mae Chaem, our first stop.

Along the way we came to a checkpoint that was charging people wanting to go up Doi Inthanon, the highest spot in Thailand. We decided it wasn't really worth it, we've been hiking there before, so we headed on to Mae Chaem. As it turns out we missed the turn off and wound up heading up Doi Inthanon anyway. We didn't connect the dots and realize that it was odd that we were heading pretty much continuously uphill. I was more focussed on keeping the Phantom moving. Loaded up as it was and facing continuous steep up hills it didn't have power to spare.

Once we'd back tracked and found the missed turn off we headed on to Mae Chaem. The turn off was about 20 meters past the second check point. We were a little surprised that nothing came of us telling the guy at the checkpoint that we were going to Mae Chaem and not Doi Inthanon, meaning we didn't have to pay the toll, only to motor straight past the Mae Chaem turn off and head up the mountain.

Along the way to Mae Chaem we went through a lot of recently burned out countryside. There were also a lot of blind tight corners. Leaning on the horn while approaching a corner is typical in these areas and there are even signs up telling you to use your horn. Beep the horn a few times as you approach the corner, listen for a horn coming the other way then take the corner well away from the center line just to be sure.

Mae Chaem soon came into sight. It's a small but pleasant town. We dropped into a few places before selecting a room for the night. We then filled the remainder of the evening with dinner at a roadside restaurant and dessert at a cafe. We were joined by a few other tourists out exploring Thailand. The company was nice and we were both able to provide each other with some advice about future destinations.

At the time 30 Baht was approximately 1 Australian dollar. 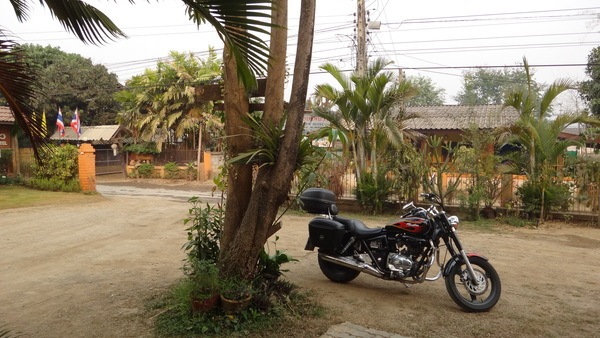