Laos is a beautiful mountainous country in south east Asia. Although it lacks the islands and beautiful coastline of some of its neighbors it makes up for it with spectacular mountains, rivers and rugged beauty. The tourism industry is still nowhere near as developed as neighboring Thailand but the country can provide everything from a budget backpacker experience to luxury travel.

Although the country remains haunted by its troubled history and is still the most heavily bombed country in history (per capita) it is emerging as a wonderful place to spend some time. If you want to expand your knowledge of twentieth century history and the south east Asian experience of the cold war specifically there is plenty of opportunity to do that.

Alternatively there is more than enough food, mountains, rivers, rock climbing, french colonial architecture, smiling people, indigenous tribal culture and artwork to keep any visitor busy for a lifetime. Laos is generally less in your face about the nasty parts of its history than neighboring Cambodia. You can very easily have a delightful vacation to Laos and not bother with the history lesson.

We spent a month in Laos seeing as much as we could in that time. This guide will provide links to information about Laos' major tourist destinations as well as our guides to getting around Laos.

It is possible to buy a sim card in Laos so you can access the Internet from your phone. Having access to maps is certainly handy when you are out exploring.

The heavily French influenced Luang Prabang is a beautiful town that sits at the meeting point of the the Mekong river and the Nam Khan river.

Its most notable tourist attractions are the sunrise alms giving, which sees hundreds of monks collecting alms in the pre-dawn quiet, and Kuang Si waterfall, a beautiful series of waterfalls a short drive outside of town. Kuang Si is sometimes referred to as Luang Prabang waterfalls.

Far less well known but well worth a visit is the traditional arts and ethnology museum if you want to learn about the various ethnic groups that call the area home. While there we also took ourselves on a DIY self guided walking tour of Luang Prabang.

Being a major tourist destination in the country there is plenty of Luang Prabang accommodation available at every price point.

Particularly if you are arriving in Laos after a long stay in Thailand you will likely appreciate the easy availability of cheese and unsweetened bread. Baguettes are a staple of Luang Prabang street food in particular.

Laos' infamous backpacker drinking tubing destination on the Nam Song river has now had a major overhaul. There are plenty of things to do in Vang Vieng as well as an abundance of hiking, rock climbing and similar in the mountains that surround it.

It is still a popular destination that is visited by a large percent of people visiting Laos so Vang Vieng accommodation is easy to come by and there are plenty of transport links to other towns.

Although it is not actually a huge tourist draw Vientiane is the national capital. Probably its most eye catching attraction is Patuxai (Victory Monument), essentially a Laotian Arc de Triomf.

Vientiane is a relatively common destination for digital nomads or others renewing their Thailand visa. For all of you here are some places to work in Vientiane.

You will find a fairly eclectic mix of foods available in Vientiane. Foreign food is certainly available but mainstream western fast food has not yet made significant inroads.

Although lacking in train lines Laos is crisscrossed by bus companies eager to transport foreign visitors. In some areas transport by boat is common.

We also wrote a review of the boat company that provided transport to Luang Prabang.

How to get from Luang Prabang to Vang Vieng

How to get from Vang Vieng to Vientiane

How to get from Vientiane to Bangkok

How To Get From Luang Prabang To Vientiane

We did this in two legs. Links to full descriptions of them are above. We went from Luang Prabang to Vang Vieng as Vang Vieng is roughly in the middle. Then from Vang Vieng we headed to Vientiane.

If you are going to travel from Luang Prabang to Vientiane overland I very strongly recommend stopping off in Vang Vieng. If you go straight through you are looking at a 7-12 hour journey depending on the weather, traffic, and whether you have a private vehicle which will drive straight there versus a bus that will be picking up and dropping off others along the way.

The roads are windy as they twist and turn through the mountains so there may be some motion sickness. Plus, just being in a bus for that long is really not pleasant. Presumably you are going to Laos to enjoy yourself and not to experience a self inflicted road travel ordeal. Stop in Vang Vieng. It is a nice town anyway.

How To Get From Vientiane To Luang Prabang

This is just the same as the above but in reverse. We recommend going from Vientiane to Vang Vieng where you should rest for at least a night or two. Then get a bus from Vang Vieng to Luang Prabang. Chances are your guesthouse or hotel can organize tickets for the bus to Vang Vieng and they may even throw in a tuk tuk from your accommodation to the bus station.

How To Get From Luang Prabang To Chiang Mai

We actually did this the other way around going from Chiang Mai to Luang Prabang. You can however simply do what we did but in reverse.

We only stayed in Chiang Khong one night. The next morning we crossed the border then took a slow boat from Chiang Khong/Huay Xai down the Mekong to Luang Prabang. Although there are speed boats available they do not look like much fun, nor do they look terribly safe. There are also two day slow boats where they pack in as many people as possible. Also not fun. Instead we went a bit fancy and opted for a two day pleasure cruise down the river and it was genuinely delightful. Click here to read more about traveling by boat to Luang Prabang.

Much of the country is rarely visited by foreign tourists. That means that figuring out how you are going to transport yourself to some off the beaten path destination can be problematic. Short of having your own vehicle of course. An organized tour can be a great way to get out there without having to figure out your own transport.

We did an excellent five day tour of north east Laos then wrote a review of Stray Travel's Long Thaang tour. This exact tour may no longer exist however Stray Travel should have a replacement.

During this five day tour we met literally zero other foreigners except for two small groups who were getting around on motorcycles. One was a pair of guys who had purchased motorcycles in Vietnam, the other was half a dozen Estonians who didn't speak much English so I do not know where they got their motorcycles. These two groups were literally the only other foreigners we encountered during the five days we were on that tour. Unless you are prepared to get your own motorcycle or go on a tour a lot of Laos is pretty tough to reach. 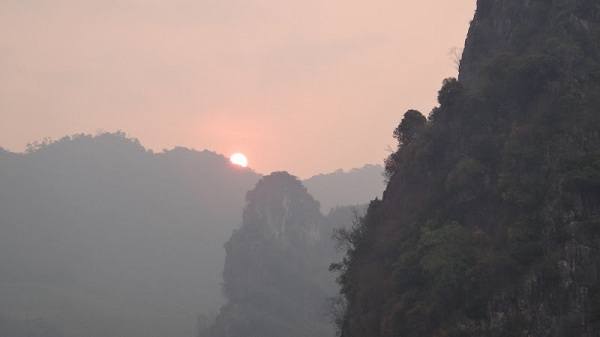 On the above tour we visited the networks of caves around Vieng Xai/Viengxay. These caves once housed the headquarters of the Laotian communist forces, the Pathet Laos, from years of US bombing. As many as 23,000 people lived and worked in the caves at any one time.

This vast network of caves were the highlight of our time in Laos. We really recommend going and checking them out. The area is much less traveled than other parts of Laos so a tour is a great way to get there. If there is any way you can visit the Vieng Xai caves, do it.

The following is a list of everywhere we stayed in Laos that we would stay again.

Still want more? Here is everything we have written about Laos.